How To Make The Easiest Slow Cooker Christmas Ham 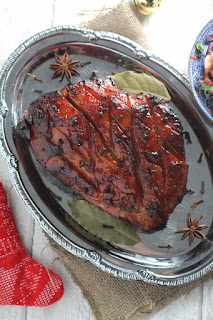 INGREDIENTS
For the ham:

For the ham glaze:

INSTRUCTIONS
1.    Cut the onion in half and place both pieces on the bottom of the slow cooker. Sit the gammon on top of the onions, fat side up. This will prevent it sticking as it cooks. Pour in the apple juice and add the peppercorns, cloves, star anise and bay leaves. Cook on low for 6-8 hours, depending on how crumbly you want your ham to be.
2.    Prepare the salad by chopping the red cabbage, apples and spring onions into small pieces. Add the grated carrot and pomegranate seeds and mix well. Make the dressing by mixing the cider vinegar, olive oil, lemon juice and salt and pepper together in a lidded jar or bottle and shake well. Add the dressing to the salad just before serving.
3.    When the ham has cooked remove it from the slow cooker and rest it on a plate for a few minutes to allow the liquid to drain away. Preheat the oven to 220c and double line a baking tin with foil (don’t skip this as the honey glaze will burn into your baking tray and it’s a nightmare to get off!)
4.    Transfer the ham to the lined tray. Remove the skin with a sharp knife leaving a layer of fat on top. Score the fat and stud it with whole cloves.
5.    Make the glaze by mixing all the ingredients together in a bowl. Pour half the glaze onto the fatty part of the ham, spreading it around until the top is fully covered.
6.    Bake in the oven for 20-25 minutes, adding the remaining glaze half way through.
7.    Allow the ham to rest for 10-15 minutes before carving.