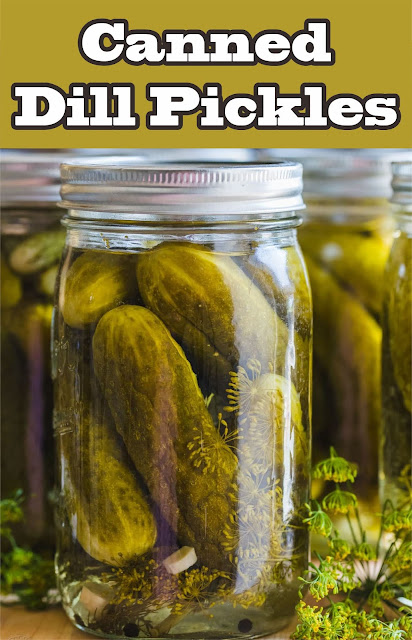 2.    Slice cucumbers into spears by cutting lengthwise into 1/2 in. slices (cutting into quarters usually works well).

5.    Combine brine ingredients in a kettle and heat to boiling.

6.    Divide the hot brine evenly between the 4 jars of cucumbers. Add water to each jar until full, leaving 1/2 in. headspace.

7.    Wipe the rim of each jar with a damp cloth to remove any cucumber or brine residue.  (If there is even a slight bit of residue, it may not allow the jar to seal properly.)

8.    Place 4 metal canning lids in a small pan.  Cover lids with water; bring to a boil.  Once the water boils, use a fork or lid wand to lift the jar lids out of the water- be careful not to burn yourself!- and place them on the jars.  Secure each lid with a jar band/ring.  (Heating the lids softens the rubber, allowing for a better seal.)

9.    Place jars in canner.  Fill with enough hot water to cover the jars by 1 to 2 inches.  Turn the burner on medium-high heat.  Bring the water to a boil, then turn off the burner and let the jars sit in the hot water until cool.

10.  Remove jars from canner and check to make sure they are all sealed.  Jars should seal as they cool and you will typically hear a snap or pinging sound as the vacuum seal is formed.  Lids will be slightly concave when sealed.

a.    To test the seal, once the jar has completely cooled, lightly tap the center of the cooled jar lid.  If it is firm and does not move, it should be sealed.  If it pushes in, it didn't seal properly.  You can still use any unsealed jars, just put them in the refrigerator and use them as soon as possible.

b.    Remove the jar rings.  For best flavor, allow to sit for 2 weeks before eating.