How To Make Brownies Popsicles 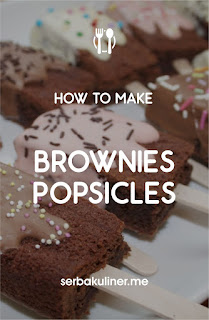 1.    Make the brownies according to the directions and let them cool completely.

2.    Cut brownies down the middle horizontally. Then cut them into 12 equal bars.

3.    Gently push popsicle sticks into one end of the brownie, being careful not to push through the top surface. Lay brownies onto wax paper.

5.    Spoon colored almond bark on top of brownie and spread over the top and sides. (You could also dip the brownies, I just didn't want my entire brownie covered in white chocolate). Shake on some sprinkles and let the almond bark harden and your done!